The island of Barbados is synonymous around the world with rum, yet an association that she holds in equal measure lies with cricket. This March, the England cricket team will head to the Caribbean for the first time in five years to play an exciting series of T20 matches at the spectacular Kensington Oval, 9, 11 & 13 March 2014.

The people of Barbados are known for being avid cricket fans, which will contribute to the electric atmosphere soon to sweep across the country, ensuring that England’s Barmy Army of fans experience a sporting event in Barbados like no other. The matches promise to display some fast-paced action, with England keen to impress upon their return to Caribbean soil, and the West Indies adding some spice to the occasion as the reigning ICC World Twenty20 Champions.

Matches between the two sides have always been tense, as one of the West Indies and Barbados’ all-time great fast bowlers, Joel Garner, knows. He comments:

“To say I’m excited about the England v West Indies series would be an understatement. England haven’t visited us since 2009 – their trip is way overdue! I wouldn’t miss these matches for the world and it will be interesting to see who wins. I know that England will be desperate to hit the ground running especially after their recent tour of Australia, but we’re the reigning T20 World Champions and playing at home in our conditions, in front of our fantastic local supporters, it’ll be tough for them to beat us.”

“Watching England play at the magnificent Kensington Oval against the West Indies will be pure magic. It’s been so long since the two teams came together on our glorious island with its fabulous people and stunning scenery that the atmosphere will be second to none. (April will have a lot to live up to!) Our stadium in Barbados has been modernized to a very high standard since the 2007 World Cup, so there really is no better place in the world to enjoy cricket than Barbados. We Bajans and repeat visitors know that, and new visitors will soon see why.”

She continued, “March really will be a wonderful time to visit Barbados, whether you’re into the cricket or not. Outside of the stadium, we have some of the world’s best beaches which are perfecting for soaking up the sun on whilst your friends and family back home are battling with the elements! Our nightlife is great too – with an abundance of high quality dining establishments and buzzing nightclubs, the fun never stops. If you head down to Oistins Fish Fry on a Friday night, you might even be lucky enough to catch a former cricketing great unwinding for the weekend, either celebrating or commiserating our team’s result.”

For tickets to the matches, see www.eticketing.co.uk/windiescricket 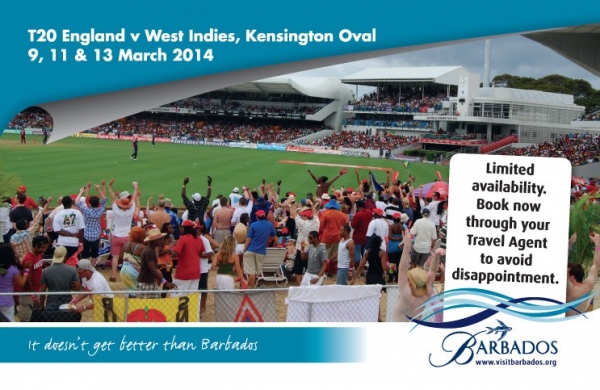