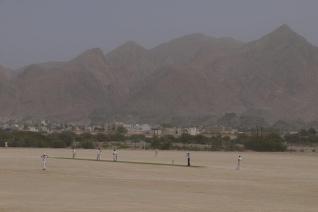 The Club Cricket Conference's historic tour to Oman was undertaken over the last week in March by a party of 14 players reinforced by player coach Min Patel and eight officials and supporters.

Following discussions at Lord's last summer with Pankaj Khimji, head of Omani cricket, an itinerary was prepared and the squad set out on 24 March for an eight day trip.

For many years CCC has maintained a tour programme that focussed mainly on Australia, travelling every four years with players selected from the Conference’s 1,000 member clubs ranging across southern England.

In recent times the Conference has toured more regularly on shorter tours to the countries of ICC Associate members. Oman follows on from the 2010 tour to Denmark and the visits of Argentina and Tanzania to the UK in the same year.

We knew that playing conditions were going to be unusual, but nothing prepared us for the extreme nature of what we eventually encountered on our first match day. Throughout the winter we had been following developments in Oman from home as news filtered out about the new grass pitch being prepared in Amerat, outside Muscat. As the weeks ticked over towards departure it had become clear that the ground was not going to be ready in time for the tour and that we would therefore be playing on astro wickets. As it transpired, we played all our matches at the one ground, about 20 kilometres out of the capital, surrounded as it was by mountains on all sides. The pitch itself was indeed brand new; an astro strip laid down in the middle of a dried mud outfield, baked hard by the sun and with 70 metre boundaries on all sides. Next to this were the earthworks that will become the new grass pitch, the first in Oman.

The squad had to quickly adapt to what were extreme conditions. The wicket had no deviation for the seam bowlers and the outfield was brutally unforgiving to the ball and human flesh alike. This was the fastest outfield in world cricket. Temperatures through the week peaked at 40 degrees and playing on an open basin with no trees or shade of any type, and where there are only 5 days of rain a year and absolutely no dew, merely added to the challenges of playing in one of cricket’s newer developing nations.

From a Manager’s perspective it has to be recorded that the enthusiasm, professionalism and attitude of our playing squad was exemplary. In the first part of the week, CCC played some outstanding cricket, culminating in a win against the national side chasing 342. The eventual tour record of played five, won three, lost two, all matches having been very close and competitive, bared testament to the skills of the Omani players as well as our own and also to the wearying effect of eight days in searing heat that sapped the strength and energy as the week wore on.

Cricket was introduced into Oman 35 years ago by the Khimji family. To this day the Khimjis continue to foster and develop the game and the country now boasts 70 teams playing structured league cricket, all on hard rolled mud pitches. Oman as an international side still relies on migrant players predominantly from Pakistan and India in ICC competitions but a burgeoning programme to develop the sport within the indigenous population is bearing fruit as the game itself spreads. Clearly all the outstanding work done by the Omani Cricket Board would benefit greatly from government support, as the game is financed entirely independently at this stage. It has to be hoped that CCC has played its part in helping raise the profile of cricket within Oman; not only was it the first side to tour exclusively there but interviews with the national press and regular reports in the papers, alongside an official visit to our last match by the Wali of Amerat region all indicate that there is a growing interest in our wonderful sport within the local community.

The entire touring party was a very happy one, on and off the field.  The players garnered the respect of the supporters for the manner in which they adapted and played and also won the respect of our hosts who were amazed at their willingness to play fivematches in six days in the Omani desert heat. Off the field, CCC were hosted at a reception by Pankaj Khimji at his residence and by Paul Sheridan, once of Shepherds Bush CC and MCC, who was so instrumental in bringing the tour to fruition. On our one day off, the squad enjoyed a wonderful dhow trip down the coast to an inlet surrounded by mountains, where they swam with turtles, sea snakes and parrot fish and enjoyed a leisurely few hours eating, drinking and losing money at poker on the beautiful briny.

Reflecting on the quality of the cricket played in Oman currently, it is clear that there are some very fine players in the country, both migrant and indigenous. Oman has shot up the ICC ladder in recent years and had just finished competing in the T20 World Cup qualifying tournament in UAE when we arrived. For it to make the next big step upwards, Oman needs the new grass pitch that should be ready by the end of July and it needs the recognition of its government to bolster the private funding that has sustained it so far. A player programme appears to be working and there is a structure in place that has introduced cricket into schools around Muscat. Oman has the ability to play a high quality game; Oman ‘A’ beat CCC in a close game that clearly highlighted the quality available but their players need more exposure to competitive cricket on grass wickets to develop their skill sets further.

In summary, Oman 2012 was a hugely challenging but brilliant tour. The hospitality of the Omani people, the pride of our hosts in what they are doing, the natural beauty of the country itself all conspired to making an unforgettable experience for first time tourists and hardened lags alike.

Our sincere thanks go out to Pankaj Khimji and the Khimji family for their wonderful hospitality; to the Omani Cricket Board for ensuring we wanted for nothing throughout our stay and for all the khangas that they presented us; to Paul Sheridan, who worked tirelessly from Muscat to prepare our way and was on hand at all times to help with the smooth running of our visit; to the non playing tourists who were on hand to support our players and provide injections of wit and humour and to lift a wilting manager back up whenever necessary;  to Chris Ayliffe who scored and uploaded daily match reports for the website and to Charlie Puckett who umpired - both without complaint (an extraordinary feat in Charlie’s case) and covered every single ball of the tour.

The players who represented the Club Cricket Conference on this ground breaking tour were also fine ambassadors for the amateur game in Southern England.   It was a privilege to manage such fine players and such decent people.

One final comment: this was possibly the first tour by CCC where it failed to bowl a single maiden over....only one was bowled throughout the trip, against us.

Posted by: The Editor

April 02,2012 17:37
These tours are open to players from member clubs of the Conference. Selection is based on the performance of players during the Summer programme of matches.